Many people may not be aware of it, but the Federal Reserve limits the number of transfers and withdrawals you can make from your savings accounts to a total of 6 per calendar month or statement cycle. (A statement cycle is equivalent to one month for most institutions.)

This regulation has been around for a while, but many people still get tripped up by it, probably because it is not talked about often. With more and more people looking to online savings accounts to earn higher interest rates, this is an important rule to be aware of.

Here’s what types of withdrawals are limited on certain accounts. 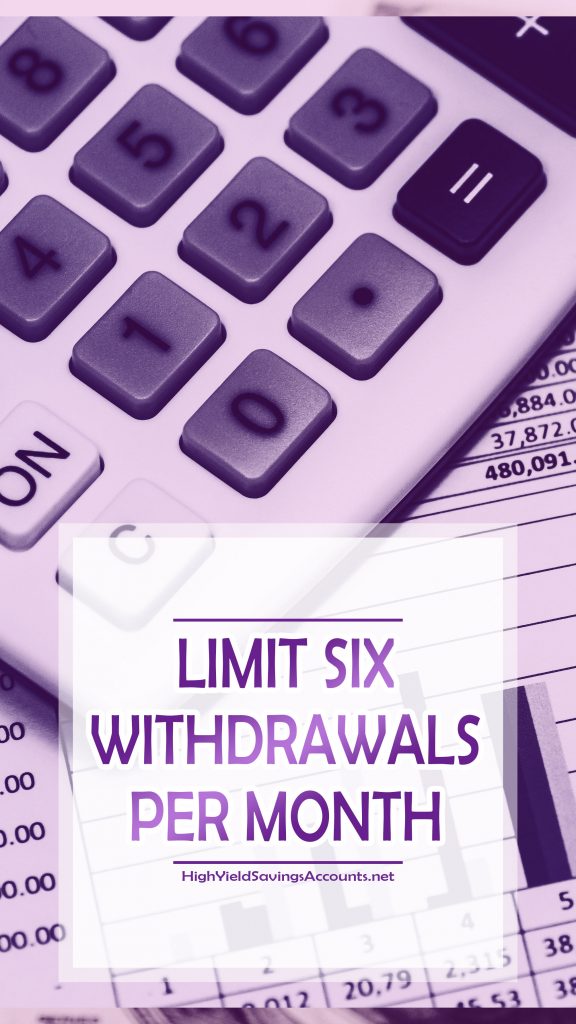 This savings account withdrawal limitation only applies to certain withdrawals and transfers:

Good news – these types of transactions are not limited:

Why does the Federal Reserve limit transactions?

It all has to do with how much money the banks can lend. Savings accounts are classified by the Federal Reserve as a “saving deposit.” The reserve requirement for savings accounts is 0%, which means banks don’t have to hold back any of the money you place in savings with them. They can lend out the exact amount you put in.

Other accounts that are labeled as “transaction accounts,” such as checking accounts, have a reserve requirement of 10%, meaning the banks must keep 10% of the balance on hand and cannot loan that money out. The reason for the difference is the assumption that you will be withdrawing money more often from transaction accounts than from saving deposits.

Since most high yield savings accounts are only online, you might need to plan your transactions carefully so you don’t go over the withdrawal limit. I usually keep a local bank handy for paying bills and keep use one of the best online savings accounts strictly for the high interest rates. 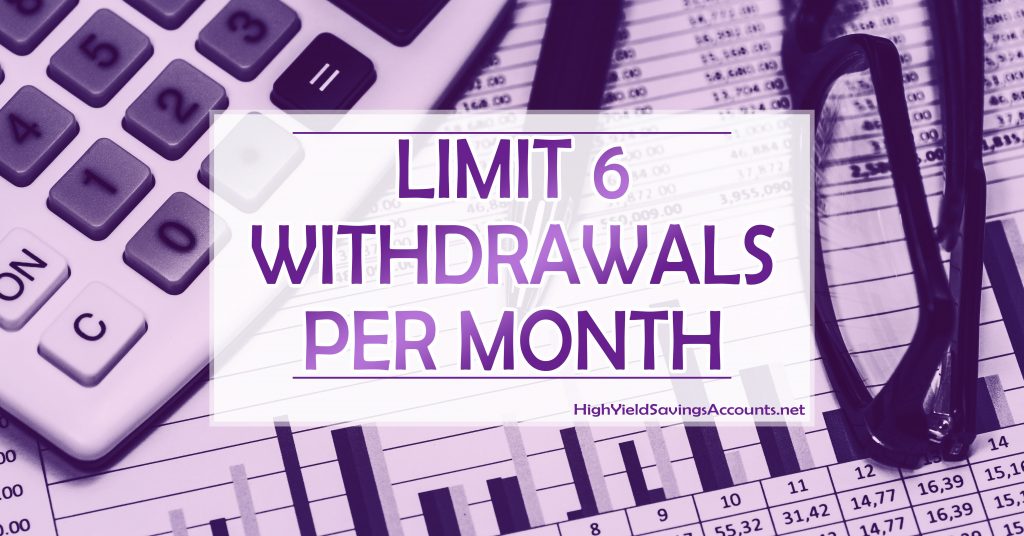 It’s typical for people to want to invest their money or just save it; sometimes investing in CDs and Bonds seems a little scary and savings accounts may seem like the safe way to go. If you just want to start a savings account and have a chunk of money to put away, it’s a good idea to think about interest rates and your options when saving.

Money Markets Accounts (MMAs) are becoming the trendy way to save, especially now when interest rates are at an all-time low. There are a few standard stipulations to MMAs, but the perk can be two to three times the interest rate than a standard savings account. Banks and credit unions are the easiest places to start a MMA account and the minimum, depending on the interest rate, is usually around $1,000. The higher the minimum, the higher the interest rate – so if you’re minimum account balance is $2,500, you’re interest rate, depending on the bank and economy can be as high as 3%. It really depends on how much money you’re willing to put away and not have access to. If you think about it, it’s an even better way to save than a savings account because you can take as much money out of a standard savings; an MMA discourages you from being able to drain your account for an impulse purchase because you have to keep that minimum balance.

For example: If you have $7,000 you do not want to spend and $3,000 of it you’re adamant about not touching for a long period of time, than find a bank that has a minimum of $3,000 and deposit your entire savings. This way, you’re making  interest on all of your money at a much higher rate with a minimum deposit you have no intention of touching in the first place. Additionally, the restrictions and higher minimum on MMAs discourage your from making regular transactions on your account like you would do with a typical checking account.

How is this possible?

MMAs are slightly different than a standard savings where banks and credit unions are lending money to approved borrowers. An MMA is money that is invested in government and corporate markets, which means as a MMA investor, you’re getting paid the current interest rate in the money market and not from current bank interest rates. Being able to invest money with higher rates has a slight downfall because banks have to restrict how much money is being taken out of the market. Financial institutions can sneak around the legal restrictions of these accounts by structuring it like a savings (so you get interest)  instead of a checking (where you get low to no interest). Because of these restrictions, money markets are structure like savings account regulations – with withdrawal limits (usually 6) and total transaction restrictions per month.

Where to go to find a Money Markets or Savings Account

Many times and depending on the financial institution, MMA and savings accounts have the same or comparable interest rates; in some cases it can be just as profitable to put your money in a standard savings. But for the most part, a MMA will have higher interest rates if you know where to look. Bankrate.com and Consumerismcommentary.com give you current information on which banks and financial institutions are giving the highest rates on MMAs and Savings Accounts. If you’re going to put your money in a bank, do a little research and see what bank will give you “more bang for your buck.” Now that’s money in the bank!

After the recent economic meltdown, many Americans have started depositing money in their savings accounts. But unfortunately, people who are knee-deep in debt are not quite well versed with the concept of eliminating their debt by using a high interest savings account. Instead, they take out credit card debt consolidation loan to pay off their outstanding dues. Now, you must be wondering if high interest savings account can be utilized to pay off the owed amount to lessen your financial obligations.

Savings accounts with online banks, regional banks, credit unions and community banks often give high interest on the savings accounts. Therefore, you can rely on these accounts to pay off your insurmountable debts. An online search will help you to find banks that give high interest on the savings. You can eradicate your credit card debt with the high return from your these accounts.

Use Debit Instead of Credit

You can use the cash in your account through a debit card offered by the high interest savings accounts. Instead of exhausting your credit card limit try out your debit card to buy things. Limited cash in your hand will restrain you from over expenditure. Along with that you will start a good habit of spending within your budget once you start using your debit card. Avoiding the use of your credit card and focusing on paying your arrears will help to wipe out the piling debts.

Know how your savings accounts can eliminate your credit card debt

Individuals must learn how to manage their finances in a way that takes into consideration short, mid and long term goals.  A short term goal might include building an emergency fund in a savings account to which you have instant access.  Mid term goals might include saving for a car or down payment for a house.  Long terms goals of course involve saving money for your retirement years.

As you might guess with each goal, different savings strategies must be considered.  If you fail to use the right strategy you may end up losing a significant portion of your savings.  This is the case when you invest money in your future via a retirement plan and then tap into those resources for financial needs that arise before you retire.  Since most retirement plans are by design intended for long term investments, the penalties and consequences of taking your money early can be significant.  Here we look at a few of the negative consequences that go hand-in-hand with early distribution of retirement funds.

Why You Should Leave Your Money in Retirement Accounts

Most people will agree that while accessing money in a retirement account could certainly help improve their personal finances in the short term, in almost all situations it is better to leave that money in the account and look for alternatives to borrowing from your retirement.  What seems like a great idea today might not be such a good idea in the long run.